True paradise on earth, this classic yet contemporary masterpiece in Tuki Tuki Valley has it all. Tranquillity and calm flow through the open, light- filled interiors to a host of alfresco areas, which gaze out over the serene setting.

Lush landscaping has been executed on a grand scale. Wide steps spill down the section, offering an enchanting path to the swimming pool.

Easily accommodating guests, the 660sqm residence boasts four bedrooms, three bathrooms and two living spaces, all designed and detailed to perfection. An emphasis on craftsmanship and refined elegance is evident in the architecture and materials on show.

“This home is an outstanding example of a great team working together to create a beautiful home.” – Judges

Set under an impressive ceiling with large beams, the capacious country-style kitchen has plenty of room to move, prep and present. In keeping with the rest of this rural retreat, it’s a perfect mix of traditional and modern, with clever high-tech tricks up its sleeve.

Every creature comfort has been catered for – from the swimming pool to cool off in during summer, to the fire to curl up in front of in winter, and an expansive kitchen for enthusiastic chefs. 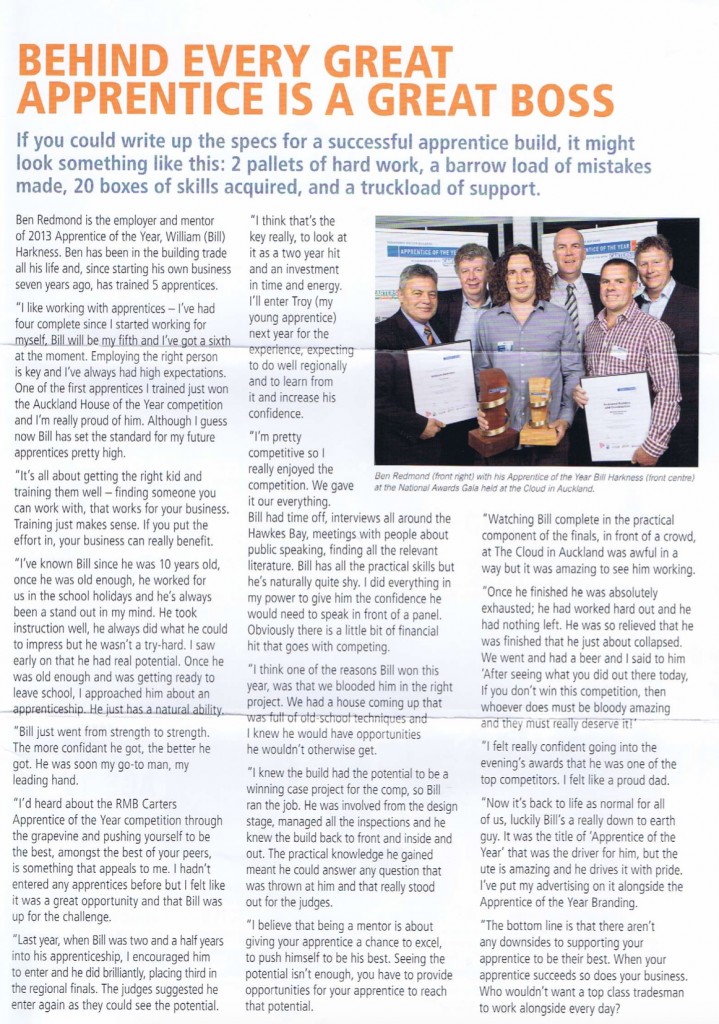 If you could write up the specs for a successful apprentice build, it might look something like this: 2 pallets of hard work, a barrow load of mistakes made, 20 boxes of skills acquired, and a truckload of support.

Ben Redmond is the employer and mentor of 2013 Apprentice of the Year, William (Bill) Harkness. Ben has been in the building trade all his life and, since starting his own business seven years ago, has trained 5 apprentices.

“I like working with apprentices – I’ve had four complete since I started working for myself. Bill will be my fifth and I’ve got a sixth at the moment. Employing the right person is key and l’ve always had high expectations. One of the first apprentices I trained just won the Auckland House of the Year competition and l’m really proud of him. Although I guess now Bill has set the standard for my future apprentices pretty high.

“It’s all about getting the right kid and training them well – finding someone you can work with, that works for your business. Training just makes sense. If you put the effort in, your business can really benefit.

“I’ve known Bill since he was 10 years old, once he was old enough, he worked for us in the school holidays and he’s always been a stand out in my mind. He took instruction well, he always did what he could to impress but he wasn’t a try-hard. I saw early on that he had real potential. Once he was old enough and was getting ready to leave school, I approached him about an apprenticeship. He just has a natural ability.

“Bill just went from strength to strength. The more confident he got, the better he got. He was soon my go-to man, my leading hand.

“I’d heard about the RMB Carters Apprentice of the Year competition through the grapevine and pushing yourself to be the best, amongst the best of your peers, is something that appeals to me. I hadn’t entered any apprentices before but I felt like it was a great opportunity and that Bill was up for the challenge.

“Last year, when Bill was two and a half years into his apprenticeship, I encouraged him to enter and he did brilliantly, placing third in the regional finals. The judges suggested he enter again as they could see the potential.

“I think that’s the key really, to look at it as a two year hit and an investment in time and energy. l’ll enter Troy (my young apprentice) next year for the experience expecting to do well regionally and to learn from it and increase his confidence.

“I’m pretty competitive so I really enjoyed the competition. We gave it our everything. Bill had time off, interviews all around the Hawkes Bay, meetings with people about public speaking, finding all the relevant literature. Bill has all the practical skills but he’s naturally quite shy. I did everything in my power to give him the confidence he would need to speak in front of a panel. Obviously there is a little bit of financial hit that goes with competing.

“I think one of the reasons Bill won this year, was that we blooded him in the right project. We had a house coming up that was full of old school techniques and — I knew he would have opportunities he wouldn’t otherwise get.

“I knew the build had the potential to be a winning case project for the comp, so Bill ran the job. He was involved from the design stage, managed all the inspections and he knew the build back to front and inside and out. The practical knowledge he gained meant he could answer any question that was thrown at him and that really stood out for the judges.

“I believe that being a mentor is about giving your apprentice a chance to excel, to push himself to be his best. Seeing the potential isn’t enough, you have to provide opportunities for your apprentice to reach that potential.

“Watching Bill complete in the practical component of the finals, in front of a crowd, at The Cloud in Auckland was awful in a way but it was amazing to see him working. Once he finished he was absolutely exhausted; he had worked hard out and he had nothing left. He was so relieved that he was finished that he just about collapsed. We went and had a beer and I said to him ‘After seeing what you did out there today, If you don’t win this competition, then whoever does must be bloody amazing and they must really deserve it

I felt really confident going into the evening’s awards that he was one of the top competitors. I felt like a proud dad.

“Now it’s back to life as normal for all of us, luckily Bill’s a really down to earth guy. It was the title of ‘Apprentice of the Year’ that was the driver for him, but the ute is amazing and he drives it with pride. I’ve put my advertising on it alongside the Apprentice of the Year Branding.

“The bottom line is that there aren’t any downsides to supporting your apprentice to be their best. When your apprentice succeeds so does your business. Who wouldn’t want a top class tradesman to work alongside every day? 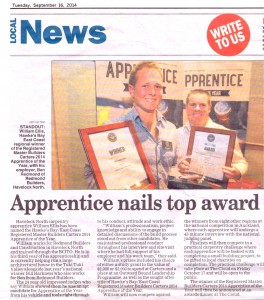 William works for Redmond Builders and Construction in Havelock North and trained through the BCITO. He is in his third year of his apprenticeship and is currently helping run a large architectural house in the Tuki Tuki Valley along side last years national winner Bill Harkness who also Works for Ben from Redmond Builders. The 24 year old impressed judges who say William showed them he was an apt candidate for Apprentice of the Year from his vehicle and tools right through to his conduct, attitude and work ethic.

Williams professionalism, project knowledge and ability to engage in detailed discussions of the build process stood out from other candidates. He maintained professional conduct throughout his interview and site visit Where he had full support of his employer and his work team, they said. William’s prizes included his choice of either a study grant to the value of $2,000 or $2,000 to spend at Carters and a place at an Outward Bound Leadership Programme, as well as the sought-after title of Hawkes Bay / East Coast Registered Master Builders Carters 2014 Apprentice of the Year.

William will now compete against the winners from eight other regions at the national competition in Auckland, where each apprentice will undergo a 45-minute interview with the national judging panel. Finalists will then compete in a practical carpentry challenge where each apprentice will be tasked with completing a small building project, to be gifted to local charities on completion. The practical challenge will take place at The Cloud on Friday October 17 and will be open to the public. The winner of the Registered Master Builders Carters 2014 Apprentice of the Year will then be announced at an awards dinner at The Cloud. 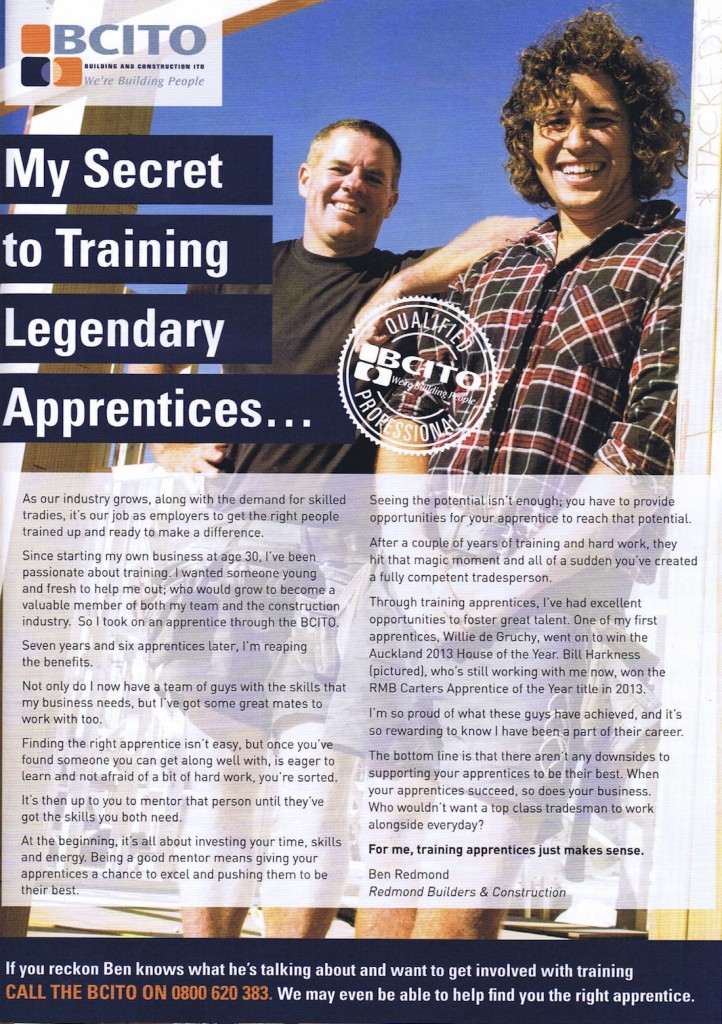 As our industry grows, along with the demand for skilled tradies, it’s our job as employers to get the right people trained up and ready to make a difference. Since starting my own business at age 30, l’ve been passionate about training. I wanted someone young and fresh to help me out; who would grow to become a valuable member of both my team and the construction industry. So I took on an apprentice through the BCITO. Seven years and six apprentices later, I’m reaping the benefits. Not only do I now have a team of guys with the skills that my business needs, but I’ve got some great mates to work with too.

Finding the right apprentice isn’t easy, but once you’ve found someone you can get along well with, is eager to learn and not afraid of a bit of hard work, you’re sorted. It’s then up to you to mentor that person until they’ve got the skills you both need. At the beginning, it’s all about investing your time, skills and energy. Being a good mentor means giving your apprentices a chance to excel and pushing them to be their best.

Seeing the potential isn’t enough; you have to provide opportunities for your apprentice to reach that potential. After a couple of years of training and hard work, they hit that magic moment and all of a sudden you’ve created a fully competent tradesperson. Through training apprentices, I’ve had excellent opportunities to foster great talent. One of my first apprentices, Willie de Gruchy, went on to win the Auckland 2013 House of the Year. Bill Harkness (pictured), who’s still working with me now, won the RMB Carters Apprentice of the Year title in 2013.

I’m so proud of what these guys have achieved, and it’s so rewarding to know I have been a part of their career. The bottom line is that there aren’t any downsides to supporting your apprentices to be their best. When your apprentices succeed, so does your business. Who wouldn’t want a top class tradesman to work alongside everyday? For me, training apprentices just makes sense.